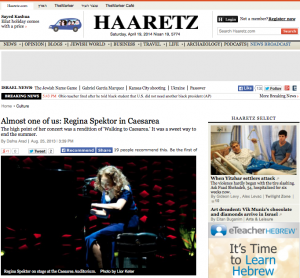 Almost one of us: Regina Spektor in Caesarea | written by Dafna Arad, Haaretz Newspaper

“The arrangement of the songs from the album for the performance is hard work for Yoed Nir, Spektor’s Israeli cellist, who received the longest and loudest applause when Spektor thanked her players for the tour that ended with this performance. His warm and confident playing manages to stand out, even against the background of Spektor’s virtuoso voice, which she uses as a drum and a kazoo when necessary.”