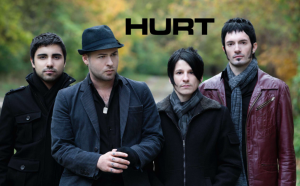 I will be joining the rock band ‘HURT‘ for their upcoming acoustic tour.